And the founder of women's cricket in Australia We know much of Stanley and Dick Harris, the two brothers who transformed a small Prep School in Worthing into the well-known and flourishing Prep school that Saint Ronan’s became.  We also learned, in previous editions, about their father, Sir Alexander; their father’s sister, Beatrice (‘the great Miss Harris’ of Berkhamstead School) and Charles Poulett-Harris, their great-grandfather, who fathered a whole dynasty of teachers.

Richard Deodatus Poulett-Harris, Charles’ eldest son, was born on Cape Breton Island in 1817. When the family returned to England, Richard went up to Trinity College, Cambridge. His first teaching job was at Huddersfield Technical College, followed by Blackheath Preparatory Schoo,l as Classics master. After his wife (with whom he had six children) died in 1856, he went to Tasmania to become the Headmaster of Hobart High School, where he was loved and respected. He actively advocated the establishment of the University of Tasmania and became the first Warden of the Senate when it was founded in 1890. 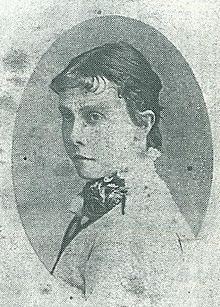 Richard had eleven children and some of his girls, in particular, possessed a strong vocation for teaching. Georgiana opened a small private school in Melbourne, while still in her twenties, and moved on from there to become the Principal of Christchurch Girls’ High School. Another daughter, Eleanor, founded the Ladies’ Grammar School and Kindergarten in Hobart, where she was ‘a visionary, pioneering lady …. a true female intellectual before her time.’ Some of Eleanor’s sisters also taught there, including her younger sister, Lily (pictured, right). Lily was a bright and adventurous girl who played the piano and violin with a high degree of skill and had a major passion for cricket. She took part in family cricket games and became a driving force in the formation of the Oyster Cove Ladies’ Cricket Club in 1894. She died, tragically young, in 1897 from a form of tuberculosis, but her team’s successes left an inspiring legacy of cricket in Tasmania and Australia and resulted in the Australian Women’s Cricket Council being formed in 1931. Lily is buried with her father Richard, in the same grave at Cornelian Bay Cemetery. "I am glad to say that I have found the place I wanted for the school. It is at Hawkhurst, in Kent" Dick Harris More...